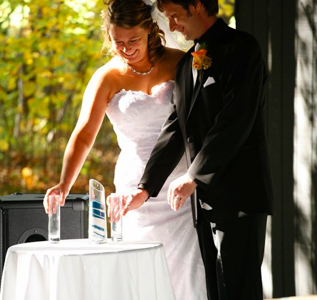 If I had to imagine a reality show that documented planning my wedding, it would be called “Event Planner Hazing” or “Bride’s Sleep Deprivation.” Depending on the week, I felt pushed beyond my limits and comfort zones. I had visions of falling through the stage during the ceremony, not having enough cupcakes (can you ever really have enough cupcakes?) and other potentially botched details. Some of the problems I may have brought on myself.

Problem 1 – I attempted to make 200 candles as wedding favors and I scheduled the candle wick deliver for exactly five days before the wedding. I would have had plenty of time to make the candles, except the delivery was three days late.

I’m a McCurdy, which I’m pretty sure means “resourceful” in Ireland, so I closed my eyes and thought of a solution. I had a box full of a variety of sizes of wicks in my candle workshop, so I Goggled each one and found a handful that would work with my size of tins. Imagine the joy I experienced when I realized I could cut them in half and double the number of wicks! Sweet success.

On to the next panic attack.

Problem 2 – The night of our wedding rehearsal, the speakers and keyboard were missing a very important adaptor. We had no music and no sound. We took a risk on a guy who was traveling from Fargo the next day who “probably had the adaptor in his vehicle.” Two hours before the wedding I heard melodies of the keyboard echoing through the Pembina Gorge. My ears have never heard a sweeter sound.

My husband later told me about his backup plan: “I was just going to have everyone hum “Here Comes the Bride.”

Problem 3 – The morning of the wedding I showed up to my hair appointment at the home of my sister-in-law. If you know Trisha, you know she is a thoughtful person, if you don’t know her, prepare to be amazed.

Earlier in the week the hairdresser Trisha had scheduled for everyone cancelled due to illness. Trisha launched into phone calls with the maid of honor, discussing back up plans and how to do their own hair, if necessary. For me, ignorance was sweet bliss as I had no idea any of this was going on. Having been a bride just a year earlier, Trisha put me on a “need to know basis.” She found a wonderful stylist who did a wonderful job on everyone’s hair and I didn’t know about any of the worry until much later. Awesome.

The Big Day – Any fears, insecurities about the details or worries about the day drifted farther away with each moment the sun shone brighter on that beautiful fall Saturday. Not many people knew what went on behind the scenes and to the guests, everything seemed to go as planned, especially since we had so many hands helping.

All day, I floated on a cloud without a care. I visited with many of the shiniest people I know, savored a cupcake, sipped on punch and enjoyed the breathtaking view from Frost Fire Ski Area near Walhalla, N.D. It’s not an event I will ever host again, so I wasn’t concerned with reflecting on what could have been done better. I thought everything was perfect.

My husband says our wedding day was “the white stuff in the middle of the Oreo” – it was a beautiful, sunny day, caught in the middle of several cold, gloomy days. But no matter what the weather was like, there were many shining moments throughout.

Months ago, my grandpa gave us his blessing and a family ring with generations of love and commitment already attached to it. It’s a symbol that means so much to both Terry and myself.

After the reception Grandpa looked at us with a big grin and a signature twinkle in his eye. “This was great,” he said. “Can we do this again next weekend?”

Even after the sleep deprivation and crazy details, you know what?

I would absolutely love to.

See how we can help you